Drivers are at the heart of everything Lightfoot does.

But technology alone is not enough. Our success lies in the way we engage and incentivise the people behind the wheel.

Unlike other fleet management solutions, or old-school telematics trackers, we understand that by encouraging drivers to improve their own performance we can achieve the best results.

All Elite Drivers who enter competitions have a 1 in 10 chance of winning a prize each week!

Lightfoot Elite Drivers can win cash prizes, with multiple prizes of between £2 to £200 up for grabs every week

Elite Drivers can also enter our weekly competitions, with some incredible prizes on offer. 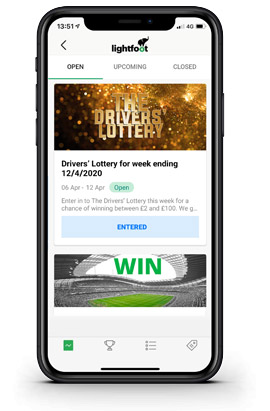 Using the Lightfoot app, all drivers can compete with colleagues and friends to see who really is the better driver.

Cash prizes and competitions aren't the only benefits of Lightfoot for drivers.

Our technology can also help make your working life easier.

Imagine a world where you can submit your monthly expenses automatically at the touch of a button! With the Lightfoot app, it's easy.

Just had Lightfoot installed in your work vehicle?

The goal is simple – aim for Elite Driver standard by keeping the lights on your dash-mounted Lightfoot device in the green as often as possible.

After every journey, you get a score that reflects how smoothly you have driven.

Nobody’s ever going to be 100% perfect, driving just isn’t like that. That’s why we set our Elite Driver standard at 85%.

This allows plenty of leeway for you to overtake other road users, quickly build speed on slip roads, and drive in other ways that are inefficient but necessary in everyday driving.

Remember, you only need to reach 85% to win in the weekly cash and prize draws in the driver app.

In addition, by setting Lightfoot Elite Driver status at 85% we can help fleets achieve the maximum benefits in terms of fuel savings, accident reduction, and minimising harmful emissions. The best results are achieved by helping most drivers reach an 85% goal than by helping a few hit 100%.

‘Long Term’ light indicates your overall performance. GREEN and AMBER lights are great, the occasional RED is fine but too much will impact your score. Don’t worry, you’ll receive 2 audible prompts before penalty points are deducted from your score.

‘Real Time’ lights move up and down rapidly to reflect ‘Live’ driving. Don’t try to be perfect; GREEN and AMBER is fine, just don’t spend too much time in RED as it will start to impact on your ‘Long Term’ light and your Lightfoot score…

Lightfoot also talks so that you don’t have to take your eyes off the road.

There are three spoken messages:

First warning that you’re not driving as smoothly as you could but part of every day driving. This warning is confidential between Lightfoot and driver.

Second nudge to say that you are not driving as smoothly as you could. If you do not ease off you will receive a penalty. This warning is also confidential between Lightfoot and driver.

Penalties reduce your score, making it more difficult to be an Elite Driver where you can win the prizes. Penalties will also show up on the weekly reports seen by management, and also on your personal driver dashboard in the Lightfoot app.

To get the most out of Lightfoot as a professional driver, you’ll need to activate your account.

Request your code here or from within the Lightfoot app.

You will receive an email from Lightfoot within 24 hours (Monday to Friday) with a link to set up your account.

Search for Lightfoot in the App Store or Play Store and download our app.

Safety always comes first - if you need to drive inefficiently for a short period of time to stay safe then do so.

Don’t try to be perfect - warnings are fine and won’t stop you being an ‘Elite Driver’, nor be visible to management.

Try to avoid penalties – they will reduce your score and be visible in management reports.

Get in touch to find out more

Already using Lightfoot? Head to our dedicated support centre where our team will be happy to assist you.